Our celebration was, in some ways, quieter than in the past. We didn't throw our usual BBQ "party", mainly because I was a fuddy-dud this year. So we were pretty much it, and our house and yard seemed almost empty. It was a smaller group that climbed to the roof of the office to watch the fireworks.

Because it was so overcast, the fireworks show was quite a disappointment. But our own homemade smoke bombs and pyrotechnics, the handiwork of Child #4, were quite fun. He's been experimenting with smoke bombs in an attempt to "perfect" them. Probably the biggest disappointment is that we haven't come up with a way to color the smoke in order to make them as bright as the commercial ones. But what we lacked in color, we made up for in size...especially with this one, shown right after it was lit. 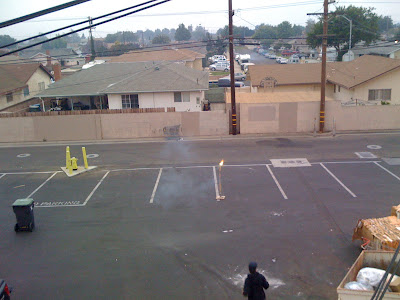 It begins to burn. 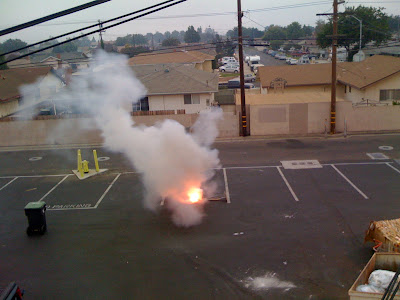 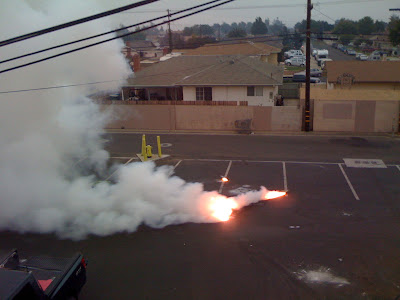 We begin to think that maybe it was just a tad too much. I'm glad I was up on the roof, above the smoke. 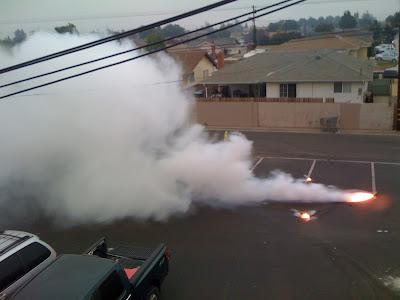 We did manage to highly amuse some young boys nearby. After that, their colored smoke bombs seemed almost boring. But we decided that maybe we might not be in the biggest hurry to set off another supersized one...

This post, along with my entire blog, is copyrighted. Please read and honor the copyright notice at the bottom of the sidebar. Thank you.
Thus wrote Rebecca at 7/05/2008 06:22:00 AM

In the end, the very end, Jesus wins.

And His grip on me is way, way stronger and more sure than my grip on Him.

All the rules and standards and convictions and non-optional principles in the world won't help you when the rubber hits the road. They have nothing to offer when it comes to grief, death, tragedy, or suffering. Jesus never fails. When I can no longer hold on to Jesus, He holds on to me.

Rebecca
Semi-Rural Small Town, United States
Mother of more children than is generally considered socially acceptable...wife of a man that I appreciate more with each passing day...part-time karate teacher...sporadic blogger

The story of my "fall to grace"

The aftermath of my "fall to grace"

This entire blog is copyrighted. Really. I mean it. You can link to it; you can even quote from it. [NOTE: taking all or most of a post and putting it on your blog is NOT "quoting".] But you didn't write it, so don't lift stuff from it without permission. Otherwise I will get highly annoyed. Besides, it's illegal and dishonest and not nice.

Note to professing Christians: you are not above the copyright laws. If you are one of those people who think you are, please repent. I'm serious. God owns the cattle on a thousand hills, but you do not own my words. Please, in the name of all that is decent and holy, stop stealing.