Finally, another post in what has become truly a hit and miss -- far more miss than hit -- blog. This is long overdue. Not just because it's been so long since my last post, but because it's been over a month and a half since this happened.

We had a wonderful Mothers' Day weekend planned. My daughter and her boyfriend surprised me by arriving on Friday afternoon. The plan was to leave Saturday morning and drive to a tiny town (I've been told the current population is 37) out in the middle of nowhere for a bluegrass festival.

But on Friday afternoon, our dog Zeke ran away. He was gone over four hours and returned that evening, not quite acting himself. By Saturday morning, it was clear that he was very, very sick. He couldn't even keep down water. We took him to the vet and she advised us to leave him there, so she could treat his nausea, vomiting and fever, try to figure out what was going on, and do whatever else seemed necessary. We felt hopeful that he would be fine; after all, he was only four years old, and a very strong and healthy dog.

So we decided to go ahead with our weekend plans, which had been put on hold. We managed to have a good time, a really great time in fact, listening to good music and camping with friends of ours. But Zeke was on our minds the whole time, especially whenever we saw another dog.

On the drive home, once we were back in cell phone range, I got the sad message from the vet. On Saturday night, Zeke had seemed to be doing better. He hadn't thrown up again once they admitted him. The fever was gone. He was even wagging his tail and being charming. So the vet was shocked when she checked on him early Sunday morning. At first she thought he was sleeping, but he was gone.

We spent the rest of the drive home either quiet or crying. The house seemed horribly empty that night.

Zeke was a good dog. He had only three character flaws: he tended to run away; he stole food; he didn't always get along with other dogs. But he was wonderful with people and children.

We got him at the pound when he was 2 years old. He picked us, and greeted us like we were his long lost family. He was ours from that moment. He was a lab mix, with the shiniest black fur I've even seen on a dog. Even though we were adamant he was going to be an outside dog, he charmed his way indoors and was so well-mannered that we loved having him around. My husband used to share his breakfast with him every morning.

He could run like the wind. He was strong, and the boys liked to harness him to their wagon or let him pull them on their bikes. He was fun to take places. He was a wonderful family pet, the kind of dog everyone wishes for their kids.

During my worst bouts of insomnia, or after bad nightmares, he was always there for me. It was amazing how comforting he would be. He was also a great listener and extremely nonjudgmental. I can't imagine being up in the night without having him hang out with me. This is what he looked like one morning when he was trying to sleep after he'd been up with me most of the night: 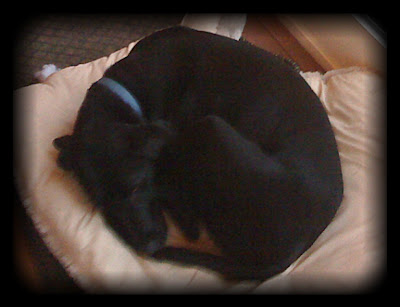 I miss having him greet me with joy and delight whenever I walk in the door at night. I miss his companionship. I miss his amazing soft fur. Even though we've since added two puppies to our household, they can never replace him.

This post, along with my entire blog, is copyrighted. Please read and honor the copyright notice at the bottom of the sidebar. Thank you.
Thus wrote Rebecca at 6/28/2010 09:22:00 PM

In the end, the very end, Jesus wins.

And His grip on me is way, way stronger and more sure than my grip on Him.

All the rules and standards and convictions and non-optional principles in the world won't help you when the rubber hits the road. They have nothing to offer when it comes to grief, death, tragedy, or suffering. Jesus never fails. When I can no longer hold on to Jesus, He holds on to me.

Rebecca
Semi-Rural Small Town, United States
Mother of more children than is generally considered socially acceptable...wife of a man that I appreciate more with each passing day...part-time karate teacher...sporadic blogger

The story of my "fall to grace"

The aftermath of my "fall to grace"

This entire blog is copyrighted. Really. I mean it. You can link to it; you can even quote from it. [NOTE: taking all or most of a post and putting it on your blog is NOT "quoting".] But you didn't write it, so don't lift stuff from it without permission. Otherwise I will get highly annoyed. Besides, it's illegal and dishonest and not nice.

Note to professing Christians: you are not above the copyright laws. If you are one of those people who think you are, please repent. I'm serious. God owns the cattle on a thousand hills, but you do not own my words. Please, in the name of all that is decent and holy, stop stealing.